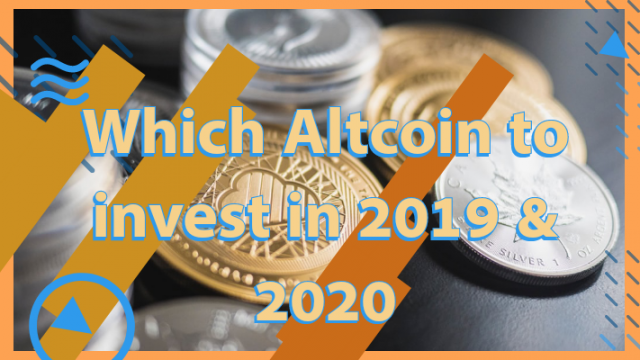 I want to tell you about some best long term cryptocurrencies that could potentially be great buying opportunities in the coming months of 2020.

There are a handful of altcoins that if you invested in past years, they would have given you a better return than bitcoin.

As cryptocurrencies are becoming popular more people are seeking investment opportunities in altcoins.

We’ll give you the list of best altcoin worth investing in.

TRON (TRX) – Fantastic long term altcoin for anyone interested in media and communication.

Tron (TRX) grew by more than 2,000% from December to January 2019. This is just three weeks growth. Do you know exactly what tron is? Or do you still wonder “What is Tron” ?

Tron is a fantastic long term altcoin to invest for anyone interested in communication, media or entertainment.

TRX project is about a platform that integrates distributed support on YouTube and Netflix like media sites.

Tron uses blockchain and P2P technology, it is a decentralized platform for entertainment, content sharing.

Think of it as asocial media where you can create and share your content to anyone in the world.

TRX/Tronix is the basic unit of currency in Tchain blockchain. It is the currency you pay for its content. Its symbol is “TRX”.

Another long run altcoin LTC is still one of the best altcoins to invest in 2020, Litecoin price has increased by 7000% since the beginning of 2017. If we compaire it to bitcoin, it has increased by 1700%.

An ex-Google employee named as ” Charlie Lee ” created the Litecoin with a vision of lighter bitcoin.

Then, on October 7, 2011, litecoin was launched through an open source client on GitHub. The Litecoin network became operational on October 13, 2011. It is known as a Bitcoin Core client fork.

In a way it is clone of bitcoin.

Digi byte token currently ranked as number 64 so it’s a nice mid cap level coin and one of the best long term cryptocurrencies to invest.

The reason that digibytes makes today’s list is because in July digi bite is going through its crypto algorithm swap, We all know that means.

Before we talk about what this means to you as an investor of digi byte.

What differentiates digi byte from other similar cryptocurrecies ?

Digi bite was launched fairly way back in 2014.

Launched fairly meaning that there was no ICO, no pre mine and no centralized company behind the project.

So digi bite is highly community driven and because of the fair launch it is highly decentralized as compared to other similar cryptocurrency.

Another differentiator is digi bytes speed right now can handle over 1,000 transactions per second but the differentiator with digi byte mean how do they stay scalable as their ecosystem grows well.

The difference with digi byte is that every two years a hard fork happens that doubles the block size / capacity of the network until the year 2035.

So right now can handle thousand TPS by the year 2035 it will be able to handle over 280 thousand transactions per second.

They uses 5 different mining algorithms which are equally weighted as opposed to Bitcoin for example we just uses one algorithm so that you can mine digibyte on a piece of hardware or just at your home computer.

Now let me be frank digi byte is highly community driven and because it really have no centralized entity behind them they’re not on top exchanges like by banance or Gemini or coinbase.

But in spite of these lack of exchange listings at least on the bigger exchanges still maintains its mint cap status.

So despite ontology having a way higher market cap and being a Chinese coin digibyte, once the community vote this is gonna really help Dig bytes volume.

BAT TOKEN / basic attention token – One of the best altcoins to invest.

BAT token currently ranked in the top 31 for most valuable crypto currencies by market cap and currently trading at about 29 cents per BAT token.

Get the BAT Browser :

BAT has made a ton of progress coming off of June, july and looks like it’s continuing that growth into September.

BAT have their brave android update means that you are now able to earn basic attention token through your Android.

Right now it’s available on your PC, on your Mac and on your mobile also, you can start earning basic attention token on your PC or mobile just by doing what you always do.

The majority people spend most of their time perusing their web on their phone probably around 50 percent if not more.

So this mobile update is gonna add to the ecosystem help spread more BAT token to other BAT holders.

In few month, the number of people using BAT in the basic attention token ecosystem has continued the growth.

And the market was pretty much trading sideways meaning that we’re continuing to see this growth even though we’re not really seeing any new people enter the crypto space.

Lets see what kind of growth we’ll see from brave browser from basic attention token once new people do enter the space.

Tezo’s currently ranked 22nd and right now trading a $1 and 22 cents per coin.

One the adoption hype around tezo’s at the moment leading many to speculate that tezo’s could potentially be a top 10 coin in the near future.

And when I say adoption hype around tezo’s project just had a major green flag now that we know Latin America’s biggest investment bank will be using tezo’s.

Tezo’s is a new decentralized blockchain that governs itself by establishing a true digital Commonwealth.

So tezo’s is a smart contract platform much like ethereum and has governance models that’s very similar to EOS.

The difference with tezo’s among other things is their smart contract platform and governance.

But the difference with tezo’s is how their smart contracts have their own domain-specific language called Mickelson.

And it’s for all those reasons that tezo’s is banking on & will be the reason that developers come to their platform and Tasos is very much more decentralized than a lot of its competitors in terms of nodes.

By comparison iOS has a huge market cap they have a lot of money but they are very centralized minimal nodes and tezo’s a newer project despite its minimal market cap has the most nodes compared to Finance Tron cosmos ontology.

So the decentralization is something I like about the project and of course the reason that it makes number one for the July list is because Latin America’s biggest investment bank to sell 1 billion dollars in STO using tezo’s now.

STOs are going to be the future because obviously they’re more compliant than icos and this adoption is going to give huge use case to the tezo’s blockchain.

This is the most recent green flag for tezo’s but as we know coinbase also choose tezo’s as the coin they want on their exchange that they allow staking services.

Which means that coinbase saw institutional demand for a stake in coin and they chose tezo’s so as more institutions as more investors come into the space.

And if their interest earning passive income and having coinbase handle to custody, tezo’s will be the coin that they can earn some passive tezo’s by staking.