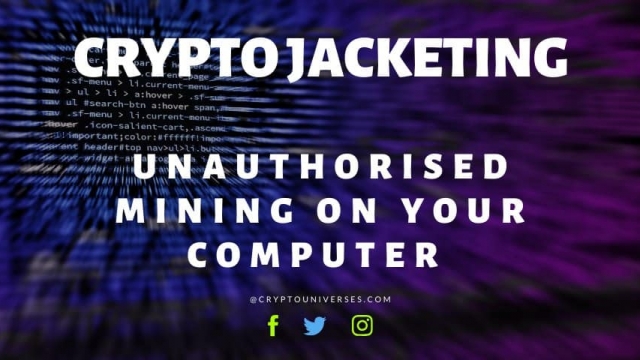 Cryptocurrencies have become very popular primarily due to rising prices. Combined with one of the main attributes of digital currencies – mining – Hackers often targets cryptocurrencies.

Contents hide
1 What is cryptojacking?
2 How can you find out if you are a victim of cryptojacking?
3 Opera versus Chrome
4 Firefox comes with a solution
5 How do I disable these scripts?
6 Threats like unauthorized cryptocurrency mining and others
7 How to protect your smartphone?
8 CoinHive and cryptojacking
9 Conclusion

They often focus on cryptojacking, which is the illegal extraction of cryptocurrencies on your device, which slows down the performance of your PC or smartphone, drains the battery faster or overheats the device. This raises the question for users to protect themselves from this type of attack.

Cryptojacking is the unauthorized use of another user’s computer to extract cryptocurrencies. In most cases, the victim device gets infected by clicking a link in an email message that copies the cryptocurrency mining code to the computer or the user visits a website with JavaScript code that loads automatically when the browser loads.

Cryptojacking is mining of cryptocurrency on your computer without you knowing it and without having to know it. You can recognize this, for example : It will reduce your PC performance or it will start overheating. Are your fans running at full power without doing hard work? Maybe you will benefit someone. Try to scan your computer with an antivirus. If it doesn’t get better, try another one.

This is not only a user of the Windows operating system, but Mac OS infections have also been recorded several times. Even 2-3 virus protection programs had to be removed to remove it.

How can you find out if you are a victim of cryptojacking?

If you have noticed that your smartphone or computer is starting to overheat or the CPU is indicating too high values, even if you are not currently using any performance-intensive application, there is a high probability that someone is exploiting a cryptocurrency on your device  without your knowledge.

If you have noticed that your computer or smartphone is getting too start overheated or that the window task manager performance option is displaying too high CPU usages values, even if you are not currently using a high performance application, there is a high chance that someone has a crypto script running on your device without your knowledge.

The first step is to click here to check if your system is infected or not by a cryptojacking script installed on your computer.

While Chrome is one of the most popular web browsers, rival Opera is still trying to develop new features it can compete with. With the latest version of this browser, you can block ads with built-in protection against cryptojacking. This feature prevents websites from running hidden scripts to mine cryptocurrencies. If you want to use this function of your browser, go to Settings> Basic settings> Block ads and click on “NoCoin”.

If you don’t want to leave your Chrome browser, you can download and use the “NoCoin” module. For Firefox users there is a similar extension called “NoMiner”. All of the above modules are used to monitor websites and monitor cryptocurrency mining scripts. If it detects it, the page is automatically locked.

Firefox comes with a solution

Mozilla is also fighting this and is releasing an update for its Firefox browser, which now offers the ability to block cryptocurrency mining scripts on websites. Mozilla announced the news on its blog.

How do I disable these scripts?

The option to block data mining scripts is available on the “Privacy and security” tab next to the settings for cookies and others. Users can now check the box that prevents miners from running.

Crypto currency mining scripts run on websites and use the computing power of the processor to mine cryptocurrencies. Of course, usually without notice or consent from the user. And all the profits go to the hacker’s account.

These scripts slow down your computer, drain your battery faster (on laptops) and increase power consumption significantly. “

The ability to block these scripts was first shown in beta in the Firefox browser, when Mozilla started working with Disconnect, a cybersecurity company.

Mozilla is not alone in this fight. Opera web browser in its smartphone version also offers protection against similar attacks, and Google Chrome has disabled these scripts via its extensions.

Editor’s choice: What is Bitcoin HD or BHD ?

Illegal cryptocurrency mining, sometimes called cryptojacking, is rapidly gaining popularity among criminals. The code that triggers the extraction can be distributed as malware that directly enters computer systems, or it can be hacked into websites so that attackers can use victimized computers unsuspectingly.

According to the report, supported by Skybox Security, illegal cryptocurrency mining was 32% of all cyber attacks last year, while ransomware was responsible for “only” 8%. Interestingly, the situation was reversed the previous year. Ransomware attacks accounted for 32% of all attacks and cryptojacking 7%.

How to protect your smartphone?

As mentioned in the introduction, hackers focus not only on computers, but also on smartphones. As with a PC, the Opera and Opera Mini web browsers can also be useful. As with standard web browsers for desktop and laptop computers, Opera mobile browsers can block malicious scripts before illegally exploiting your device.

You can activate ad and script blocking directly in your application settings. If you are using Firefox, you can use the “No Miner” add-on, and iPhone owners who surf Safari will appreciate “1blocker” again. You can also download Malwarebytes, designed for desktop and mobile devices.

The drop in popularity is certainly due to the end of the CoinHive service. Unfortunately, this great service is out of control. Instead of achieving their main goal of making money on websites (like magazines, etc.) instead of advertising, hackers began to do so. The mining script (program) has become more sophisticated due to user inattention (downloading and installing cracked and questionable programs) or mining has started.

Attenuation of this type of attack is good news, but at the same time, the number of attacks on businesses has increased since the last quarter. However, much more experience is required for this. An experienced hacker doesn’t need CoinHive … So, thanks to CoinHive, only the suckers have fallen.

In summary, the extraction of cryptocurrencies on websites does not necessarily have to be motivated by bad intentions. However, it is important that the site visitor is warned in advance or that the mining is done illegally without his knowledge. If you are interested in the content of the website and the authors inform you in advance that they will benefit from your device when you visit their website, this may be a way to support the website.

It is clear that criminals will find and use any means possible to make money, and cryptojacking is a fairly easy way for them. What is very positive is that even the manufacturers of browsers react to it and try to fight it.