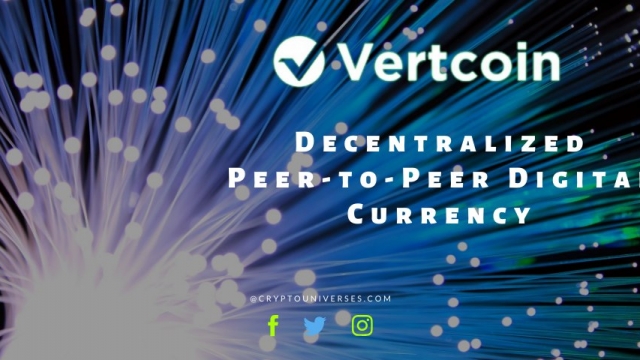 CEO of Vertbase  – Justin Seidl recently held a conference with the Vertcoin cryptocurrency community. The Vertcoin team is not linked in organizational terms to Vertbase. However, it supports the efforts and works with Vertbase to clarify the project information.

Justin always looked at Bitcoin, but was initially skeptical. It wasn’t until mid-2016 that it really got his attention. His first instinct was to become a miner, he looked at the cost of bitcoin mining and the low profit yielding ( but the more he looked at it, the less excited he was. )

It wasn’t until he discovered Litecoin and followed Charlie Lee that his interest in cryptos was renewed. He also wanted to find a way to be part of the community. Mining was an option, but in terms of profits, it didn’t look as good as Bitcoin. On the recommendation of friends, he then met Vertcoin and Mining Crypto from ASIC Miner and transferred all of his Litecoin to Vertcoin.

Vertbase’s goal is to use Vertcoin to make a simple change in the US dollar and increase the number of people using this crypto currency. Vertbase is a big project, but a necessary first step is to bring this coin to people. Simplifying the way people buy Vertcoin will lead to new and innovative ways to use this coin. This can quickly gain in value in the near future.

The history of Vertcoin dates back to 2014. In an article in the International Business Times, Vertcoin was described as a possible successor to Bitcoin.

Another important day was May 7, 2017. when the Segwit was activated on the main network.

Vertcoin is a world crypto-literally. Vertcoin tries to be a “coin for ordinary people”. This open source peer-to-peer cryptocurrency is based on the principles that any cryptocurrency that really wants to serve people should have ” These are for example, the ASIC resistance, one-click miner or the fact that the entire project is only funded by donations and contributions from the community.

Vertcoin was introduced as an alternative to Bitcoin or Litecoin on its own blockchain. This currency has been true to their concept of “the people’s coin” since its inception. The start of the VTC was not a sign of an airdrop or an ICO.

Another feature of Vertcoin is the negligible transaction costs. The implementation of Lightning Net is helping Vertcoin bring cryptocurrency fees close to zero.

Likewise, the developers of VTC decided that it would be ideal if users could use it and save it on Mac, Windows or Linux.

Vertcoin is therefore one of the multi-platform digital currencies.

One of the most important advantages of the ATC is that it is ASIC resistance. If Vertcoin is to be called “a coin for ordinary people”, it cannot afford to be mined by big mining companies. So far, this name is doing well.

Unlike crypto like Bitcoin, Dash or Litecoin, Vertcoin is ASIC resistant. Simply this means that this currency cannot be mined by machines designed exclusively for the mining of cryptocurrencies.

These facilities are generally very difficult to obtain for small miners and ordinary people, which could lead to an imbalance while mining Vertcoin.

Despite this, the team is still trying to develop Vertcoin so that mining with these machines become impossible. Mining is therefore accessible to all and is fairly enough.

But you ask, why does the team care so much about ASIC resistance? The reason is simple. If the VTC plans to serve all people, all people must have the same opportunity to access the cryptomena. That is why, for example, there were two forms . Since the original hash function, which was taken over from Litecoin, it has gradually moved to Lyra2RE and later to Lyra2REv2. This was done mainly to decentralize mining. Litecoin is not ASIC resistant.

But you are wondering why the team cares so much about resistance to ASIC? The reason is simple. If the VTC plans to serve everyone, everyone should have the same opportunity to access the crypto. This is why there were 2 forms for example. Since the original hash function was taken over by Litecoin, This was mainly done to decentralize mining. Litecoin is not resistant to ASIC.

As mentioned above, the Vertcoin team is only made up of volunteers. Nevertheless, the team has many experts in cryptocurrency, programming, mining and marketing.

James Lovejoy is the main developer. James has been involved in programming in all its forms since childhood. He is currently a researcher at the MIT as part of the Digital Currency Initiative. In particular, the implementation of monetary policy in the cryptosphere is being developed.

Joe Straub is another important member of the team. He initially studied and worked with .NET and C #, but also has experience with other programming languages. Since his arrival in early 2014, he has worked on the VTC project for almost the entire duration of the project.

There are still many experts on the team, such as Alex Turek (turekaj), Bryan Goodson (Goodminer), Eric Etang also known as (Etang600), but also a developer known only under the pseudonym jk_14. The entire team strives to make the best possible environment for Vertcoin’s future and achieve its mission. That is why they came up with One-click-miner, which we will talk about in the next section.

There are still other experts in the team, like Alex Turek, Bryan Goodson, Eric Etang. The whole team is committed to creating the best possible environment for the future of Vertcoin and fulfilling its mission. That’s why they developed a one-click miner.

As mentioned earlier, mining is one of the greatest privileges of the VTC. There are several reasons (apart from the ASIC resistance). Mining is generally very user-friendly and relatively easy, even for people without advanced computer skills. And let’s take a look at one of these simple options.

Vertcoin team develops One-Click-Miner for people who want to mine their own cryptocurrencies but who are not experts. In this article, we will not go into the details of mining as such. However, if you want to immerse yourself in something like this, you will find all the information you need on Githube.

Starting mining should be really easy and everyone should be able to do it. As the name suggests, mining with one-click miner should only take a few clicks to mine vertcoin also.

Vertcoin Exchanges – Where to buy vertcoin ?